Wanderings: The Pleasures of a Neighborhood 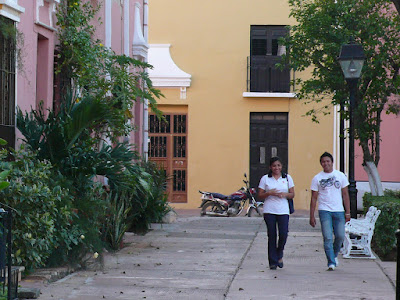 Valladolid, Yucatán -- Once a long time ago, I took a tour. We spent a lot of time looking at sites of interest through the windows of a bus. The bus occasionally stopped so we could briefly descend with a guide, who walked ahead holding an umbrella high in the air, explaining things to us and making sure the group stayed together. 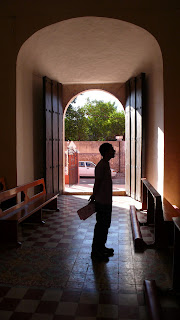 It was not a bad tour, I suppose, but in short order I realized that being a traditional "tourist" was not for me. I've seen a pretty good sampling of countries and cultures in the years since that experience, and I have tried to do my traveling in more discreet, organic ways that permit me to come closer to feeling the real textures and rhythms of a place. I want to see life and nature, not "attractions," which generally are cooked up by marketers especially for visitors and have little to do with reality. I want to feel history and observe culture, which is not easy when most everyone around me is more intent upon posting vacation poses to Facebook than in having an experience, and the locals I meet are only friendly if they think I will buy something.

Rather than gain superficial impressions of a wide area, I prefer to get to know a small geographical area in depth. One of my favorite ways to enjoy visiting a place is to immerse myself in a neighborhood and if possible stay awhile. It's a good way to get a sense of place, absorb the atmosphere and get to meet residents, who are much more informative and fascinating than any tour guide. I have done this in a number of cities over the years and find I can return again and again, and always feel at home in "my" neighborhood.

Habitually I adopt a cafe or restaurant, and once I have been in a few times, the staff recognize me. If the waiters are good and it's a real cafe, after a few days they bring my cafe americano -- black, no sugar -- without even having to ask (talk about feeling at home!). On the street, once they realize I'm not just a day-tripper who will be on the road the same afternoon, residents take the time to say hello. Soon I know streets, routines, bus stops, and where to find things. I begin to feel connected to the place. Then when I feel ready I can branch out and take day trips from my base area, returning to the comforts of the neighborhood at the end of the day.

In Valladolid, I have done just that. I discovered the neighborhood of La Candelaria, a historic area about three blocks from the main plaza. 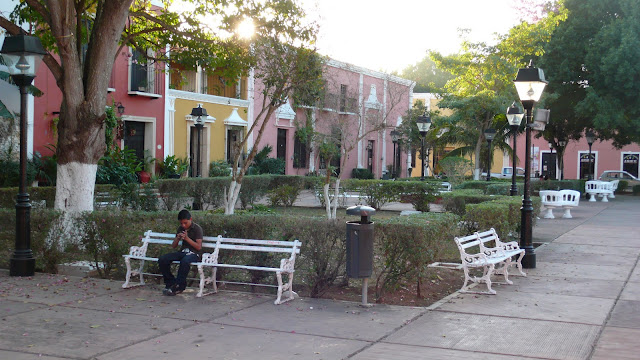 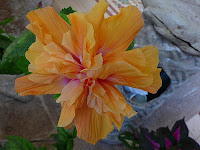 La Candelaria meets all my criteria for a good neighborhood. It's within easy walking distance to centro and transportation. On tranquil Parque La Candelaria itself there is a good Italian restaurant, cafe, ice cream shop, a hostel, church, library and theater nestled amongst family homes, shaded benches and flowers. Within a couple-blocks radius it is possible to find just about anything else you might need.

There is activity in the park, but it never seems to get crowded or noisy. In the morning you can see men on bicycles and women dressed in traditional huipiles going to work and doing the daily marketing. People meet here to talk and pass the time of day. At night families come to the park to talk, walk their dogs, and play with their children.

On my first visit to Valladolid a few years ago I stayed in a large hotel on the main plaza. The visit was fine, but after seeing the cathedral, looking around downtown and visiting cenote Zací, I left, not feeling any particular interest in returning. After my immersion in La Candelaria, I look forward to future visits. 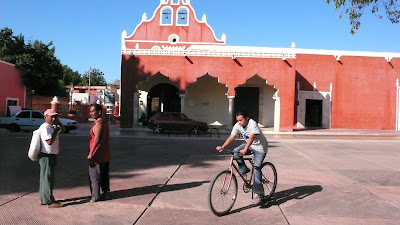 
UPDATE, Feb. 2012: The hotel appears to have changed ownership and prices have risen a bit, but it's still a good deal. Here is a new link.
Posted by Marc Olson at 11:54 AM 11 comments: 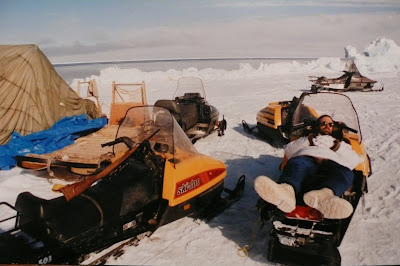 May, 1994: I was working on a project on the floating ice of the Chukchi Sea, north of Barrow, Alaska, where the temperature was well below zero. My recollection of this "siesta" lying atop a snow machine amidst ice and snow is a memory of feeling quite warm, hot actually. I was resting for a few moments in order to cool down.

December, 2010: I awoke chilled enough some mornings in my Mérida bedroom that I didn't want to get out from beneath the blanket. My nose, sticking out above the covers, felt cold. I knew that when I put my feet down on the hard tile floor it would feel very cold. One of these mornings when I finally got up and checked the thermometer in the patio right outside my bedroom, the temperature was 19 degrees Celsius, or about 66 F.

How is it that a person who grew up in cold climates finds himself chilly at a temperature which a few years in the past may have had him running around barefoot and in shorts? I suppose it has to do with the amazing adaptability of human beings, what we are accustomed to and what we expect.

It's interesting to walk in Mérida centro on a cool evening, comfortably dressed in short sleeves, and notice that many others are wearing sweaters and jackets, with scarves (bufandas, one of my favorite words in Spanish) tightly wrapped around their necks or even over their noses and mouths. 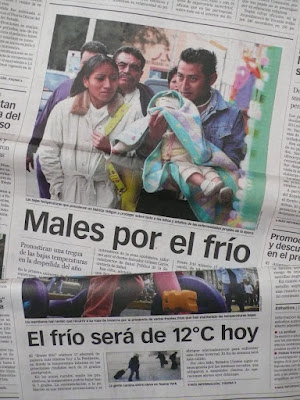 Often a frente frío, cold front, rates big play in the local newspapers, which feature photos of Yucatecans bundled up to face the winter chill. Here is an image of two front-page headlines from Mérida's Diario de Yucatán a couple of weeks ago. The lower headline warns the public, "The cold will be 12C (54F) today."

As I was walking one fresh morning recently I noticed a street sweeper at work along Calle 59, wearing gloves, long pants, and a long-sleeved sweatshirt with hood pulled up over the top of his baseball cap so only his visor and face were exposed. I was moving at an easy pace on the shady side of the street, but not slow enough to keep from getting a little damp under my short-sleeved cotton polo shirt. This guy was exercising hard with his big broom, and appeared to be quite comfortable all bundled up. It's amazing to me that two people can feel and react so differently to the same weather circumstances.

Due to the cold, some schools here in December gave students permission to arrive a half-hour late for morning classes. The early morning temperature was in the range of 10 - 13 degrees Celsius, or about 50 - 55 F. A friend of mine who teaches in an elementary school in Mérida tells me that absenteeism is very high on these days.

Meanwhile, my friend and former neighbor Sally Donaldson posted this picture on her Facebook page, showing the view from my old neighborhood in Juneau. This was a "warm" winter day I think, with the temperature hovering just around freezing, lots of moisture in the air and snow or freezing rain possible at any moment. 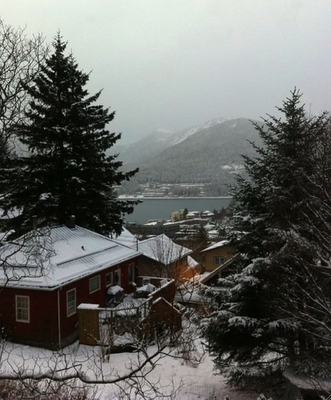 Normally when the weather is like this in Juneau, we hope for a stretch of clear days. Then the sun shines and without an insulating layer of low clouds the temperature drops. The roads and walks remain free of ice and snow. The result is that driving and outdoor activities are more pleasant, so people go outdoors to hike, ski and play. That is quite a contrast to scenes of Yucatecans "freezing" amongst the flowers and palm trees at much warmer temperatures.

Why the contrast? It has a lot to do with what we are used to. For those who have always lived in a climate where most of the year their bodies are wrapped in a sweaty envelope of intense heat and high humidity (read earlier post here), a front of cooler, dry air can seem very cold. And there is a psychological element as well. It's winter. It's chilly. Brrrrrrr! Must be time to bundle up.

I am not belittling peoples' reactions to the cold here. There are areas of Yucatán where the winter temperatures sometimes reach almost to freezing. Homes are designed for a hot climate, not cold. The same qualities that make homes comfortable most of the year (airflow, open space, high ceilings) make them drafty and chilly in winter weather. And virtually no homes in Yucatán have heat. Many do not have hot water.

In addition, families of limited means simply don't have the money to devote to sweaters, jackets and blankets, especially with a cool season that is relatively short. Many are doing well if they keep food on the table, keep the lights burning and can provide their children with adequate shoes and clothing. Buying winter clothing is just not feasible.

Personally, although I sometimes marvel at how I have adapted to the Yucatecan heat, the cool weather of December and January doesn't bother me. But I don't swim from November until about March. When visitors from the north show up, they want to jump in the pool or go to the beach. I hang out with them, but generally I don't go in. Although in Alaska I swam in water cold enough to have ice floating in it without feeling particularly distressed, here the unheated pool or ocean in winter feels uncomfortable. And I do find myself grabbing a sweater at times when the temperature is not really what we would consider "sweater weather" up north. I have gotten to the point where I do as the locals do, I guess.

Interestingly, when I travel north into winter weather, I feel fine. It seems I have expanded my comfort range rather than shifted it, but a chilly winter morning still seems a lot colder in Yucatán than in Alaska. Of course how we deal with weather has a lot to do with experience, having appropriate clothing and a variety of other factors. However, I have begun to think that psychology and our expectations have a lot more to do with how we react to weather than we normally give credit for.