Living Here: The Power of Relationships 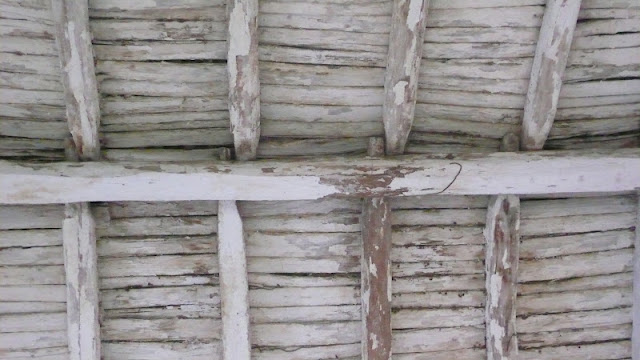 One of the most satisfying aspects of Mexican culture, to those integrated enough to appreciate it, is the nature and power of personal relationships. A while ago I was strongly reminded of this.

One rainy afternoon I was far from home, riding a combi van in the countryside, when I received a desperate call. "I have been accused of something terrible. This could land me in prison. Please come help."

That was all he said. It could have been the weak cell phone connection, but it sounded as if my good friend Juan may have been crying. Then I heard background noises and abruptly the call was disconnected.

I had an idea of what the issue was because Juan recently had mentioned a very uncomfortable situation in which he had haplessly and unavoidably become involved. The accusation against my kind, honest and gentle friend was ludicrous; it appeared he was being made a scapegoat.

I had no choice. I got off the combi at the next town and boarded another that started me on an overnight journey back to Mérida.

The next day was a Friday, and soon after I arrived home, Juan and I sat down at my kitchen table to figure out what to do. It was obvious that he needed the advice of a lawyer, so I made a list of people I knew who might refer me to someone trustworthy.

On the top of my list was Diego, an attorney whom I'd gotten to know some years before when we'd been in a class together. I deeply respect Diego's integrity. I'd socialized occasionally with him and his wife back then, but to be honest had not done much to maintain the friendship over the years. So although I knew Diego was my best bet, I was a little reluctant to call him out of the blue and ask for help. But the situation was urgent. Juan needed to be informed about his rights, he needed support and a plan, and he needed these things by Monday. I rang Diego's cell number and left a message. Then I started communicating with other contacts on my list.

I had almost given up on Diego when he rang the next day. He apologized profusely for not calling me back sooner, explaining that he and his wife were out of the country and not able to check messages frequently. But he told me to call one of his associates in Mérida and gave me a cell phone number.

I called. The attorney interviewed Juan over the phone for about an hour and finally asked him, "can you come down to the office in about fifteen minutes? I'm the criminal specialist, but we've got several issues here and I want to bring in another associate."

The reception area and halls of the law office were dark, hot and stuffy. It seemed that Diego's law partner had opened up on a Saturday afternoon just for us. After we'd talked for a bit in an air-conditioned office, the other attorney arrived. They proceeded to spend two hours asking questions, discussing points of law, drafting documents and developing a strategy to help Juan resolve his problem. They were serious and professional, but also cracked the occasional joke to keep the atmosphere from getting too heavy. They put us at ease. I liked them both.

When we were wrapping up, the attorneys offered their cell phone numbers to Juan, with a reminder that he could call "24 hours a day" in case of new developments or if he had questions.

I asked if we needed to set up a billing account with the firm. Both men smiled and one said, "Oh no, you are Diego's friends. Don't worry about it." They stood, shook our hands, and as we walked out reminded Juan that they would be in touch next week.

So we'd had a two-hour meeting with a pair of good attorneys who had responded immediately to my call. They came into work on a hot Saturday afternoon to give legal advice to Juan, the friend of a friend of their friend and law associate. They had placed themselves on-call 24 - 7.

For friendship. Do not mention money.

And this is not a rare occurrence in Mexico. It is not unusual at all. In fact, the power of relationships is often what gets things done, especially in business and politics. Someone looks you in the eye and says, "You've got my support, amigo," and things start to happen.

This system not only gets things done, it deepens and strengthens relationships. I think it goes back to colonial times, when there was no body of law to protect ordinary people. People found support and a safety net in their family and social network, so these ties became extremely important. These relationships are nurtured over a lifetime. They remain crucial to this day. The workings and essential nature of these friendships are aspects of the culture which we foreigners often do not understand.

Of course this is not the end of my story. Quite possibly some day, Diego or one of his associates will ring me and say, "I wonder if you can help me out with something." And I will say, "Sure, amigo, you can count on me. I'll be right over."


This is a true story. Names and details have been altered to protect privacy. 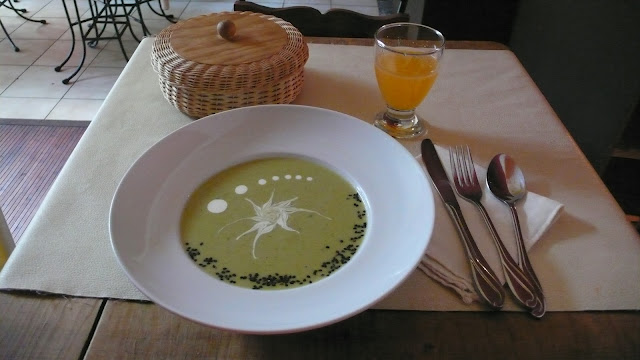 One of the really nice things about living in Mexico is that if you like local cuisine you can eat out frequently without spending a lot of money. There is plenty of delicious food available at reasonable prices for those who know where to look. The institution of the cocina economica, budget restaurants which provide low-priced, home-cooked meals, is common throughout the country. This food ranges to excellent quality, but at the price of 25 to 50 pesos per serving (roughly two to four U.S. dollars), it's not fancy. 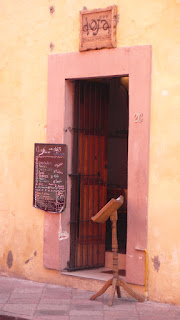 I enjoy eating out daily, so I have become fairly proficient at finding good food for few pesos, even when in unfamiliar areas. The general rule for finding tasty, economical food is to go to working-class neighborhoods away from high-rent districts and tourist zones.

However occasionally I find an affordable eating place that bends the rule. One of those is El Rojo, in Querétaro. I visit Querétaro fairly often, and over the past couple of years this tiny restaurant has become my very favorite budget eating place in all of Mexico.

El Rojo is a real "hole-in-the-wall," just a niche behind a door in an ancient wall, with about ten tables inside. It is located in one of the nicest neighborhoods in the centro historico, just steps from one of Querétaro's most-loved parks. Nearby are many high-profile eating establishments that charge several times the price yet may not surpass the creativity and quality of the cuisine at El Rojo.


The menu features regional fare along with Italian and Japanese dishes. The interesting part comes when the chef occasionally mixes ingredients and styles of the various cuisines.

On a recent visit, I started with a wonderful cream of chile poblano (pictured above) garnished with drops of cream and black seeds. The main dish was a pepper-style beef, served with refried beans and rice, and a salad of cucumber, carrot and tomato on a bed of lettuce, sprinkled with a very Japanese sesame-ginger dressing. This was accompanied by fresh handmade tortillas and washed down with an endlessly-refilled glass of fresh melon water.  It was a satisfying and delicious meal. 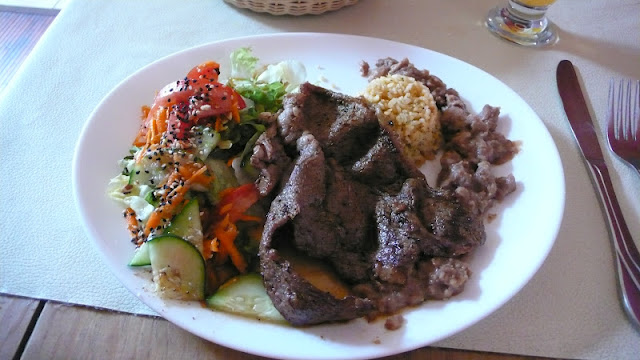 Another day, lunch started with sopa de huitlocoche, corn fungus soup. Huitlocoche is a traditional Mexican ingredient. The main plate consisted of huarache de nopal, a tender grilled whole nopal cactus leaf (instead of the traditional masa dough), covered with grilled pork, cheese, onions and cream. This came with tortillas, beans, rice, and a green salad with tomatoes and a delicious honey dressing. Guayaba juice was the drink of the day. Although it's not on the menu, they threw in a serving of rich vanilla ice cream sprinkled with fresh-ground dark-roast coffee. It was a superb lunch of traditional ingredients combined in a creative fashion. 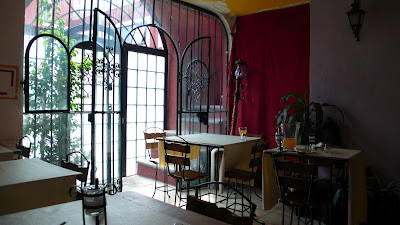 The table coverings and napkins at El Rojo are cloth. The tableware and utensils are hefty. The ambiance is bright, eclectic and modern, and everything is scrupulously clean. The kitchen is in front; you can peek in to see what's cooking and say hello to the chef as you enter.

This is a family business. The young chef, Aaron Saavedra, is assisted by his mother, who waits tables, and an older gentleman who I have not met but who appears to be the chef's father or another relative.

It looks to me like El Rojo is only a sideline. The family's associated catering business, Dojä -- Cocina de Inspiración, which is run out of the same kitchen, boasts a large international menu. I get the impression that while catering pays the bills, El Rojo is a labor of love and perhaps a place to experiment and try out new dishes on a small but appreciative clientele.

A complete lunch, everything included, costs about what a cocina economica would charge, 50 pesos, or less than four U. S. dollars, but rarely are budget restaurants this interesting or this nice. El Rojo/Dojä is located at Avenida Vicente Guerrero #2-C, just steps from the corner of Calle Madero and shady Jardín Guerrero. El Rojo opens only for the comida, afternoon meal, at 2:00PM on weekdays, and closes when the day's two-choice menu is sold out, which is usually by around 4:00PM.

I mentioned that El Rojo is my favorite budget restaurant in Mexico. I guess I'd go one step further. It's probably my favorite restaurant regardless of price. It's well worth a visit if you find yourself in Querétaro.
Posted by Marc Olson at 3:57 PM 10 comments: Links to this post