Face Lift: The Old House Gets a New Look 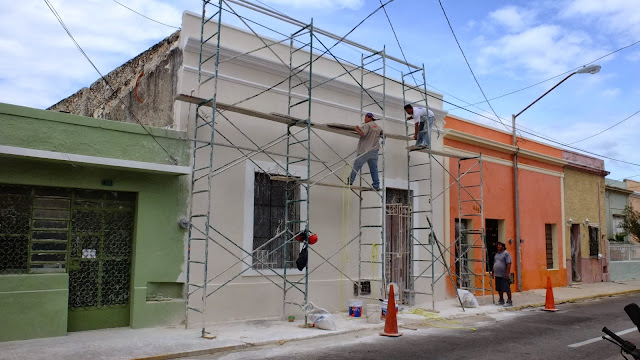 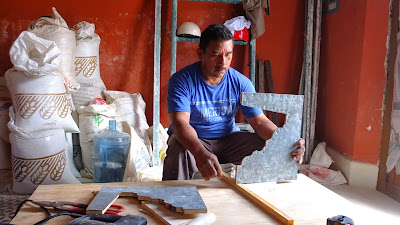 It took five weeks, but it was worth the time invested. The facade of my house is finished, and I suspect that the place has not looked better since the day construction was completed 90 or so years ago.

It started back in September, when I signed a contract with the "Programa de Rescate de Fachadas del Ayuntamiento de Mérida" (The Facade Recovery Program of the City of Mérida). In the contract I agreed to buy all materials for the renovation of the front of my house, with the city supplying the skilled labor free of charge. When the work crew appeared as scheduled in mid-October, the supervisor brought me an itemized materials list, with retail prices, and we talked about the details of the unfolding project. Scaffolds went up immediately, and under the hammers of the work crew, the cracked and crumbling original facade of my home was quickly obliterated, chunk by chunk.

As this began, the head albañil, a soft-spoken middle-aged Mayan man named Luis, began measuring and hand-cutting cardboard templates of the architectural details so they could be accurately reproduced as the wall was resurfaced. Despite careful placement of plastic sheeting on floors, windows and doors and constant cleanups, the entire house, along with those of a few of my patient neighbors, was enveloped in a thick cloud of fine, beige Yucatecan dust. 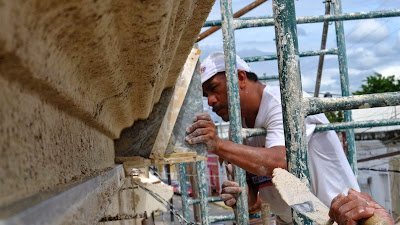 New concrete was mixed with modern adhesives to assure that the carefully-applied layers of the reconstructed facade will adhere well and be long-lasting. First, a rough coat was thrown onto the now-naked mamposteria stone walls. When this layer had cured sufficiently, a finer layer was troweled and smoothed on, to be followed when dry by the finish coat of silky-smooth white cement. At the same time, the facade's adornments were recreated using molds cut from sheet steel following the cardboard templates.

Every few days, Luis or the supervisor, an engineer named Marcos, would notify me of the materials needed for the coming stage of work, and I would walk five blocks down to the nearest building supply store to place and pay for the order. The materials would be delivered the following afternoon.

Which brings up the topic of patience. When materials were delivered, they were piled into my front sala, or living room, which had been emptied of furniture for the duration of the project. The sala also is where workers kept their tools and works clothes, and where often they ate lunch and rested out of the sun. When a homeowner decides to participate in the facade renovation program, he/she agrees to provide work space, storage for materials, a source of water, and a bathroom for the workers. They take over part of the house. They were polite and careful, but still there were half a dozen strangers in the house for more than a month. Doing the facade correctly is a painstaking process, and patience is required. 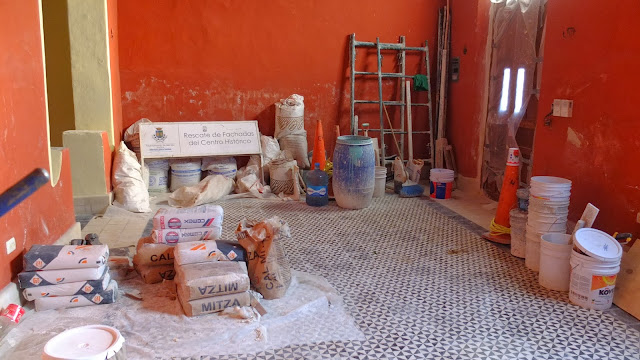 The house had been painted pink with white trim and ironwork when I bought it, and it remained that way for ten years. I'd decided to give the house a more dignified color scheme with the renovation, and am very happy with black metalwork against a white and cream background. The results give the place a more traditional, colonial appearance. My costs for this project were about $9000 Mexican pesos, or a bit less than $700 U.S. dollars.

Following are a couple more images of the final results. 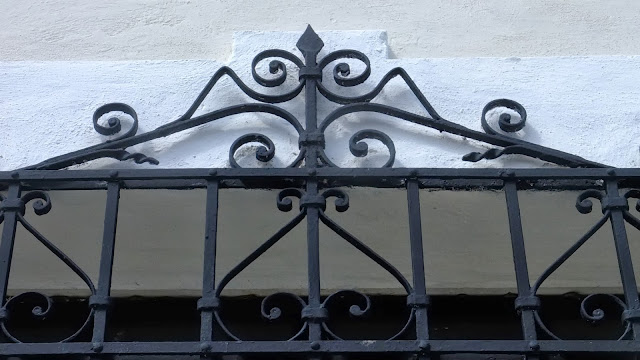 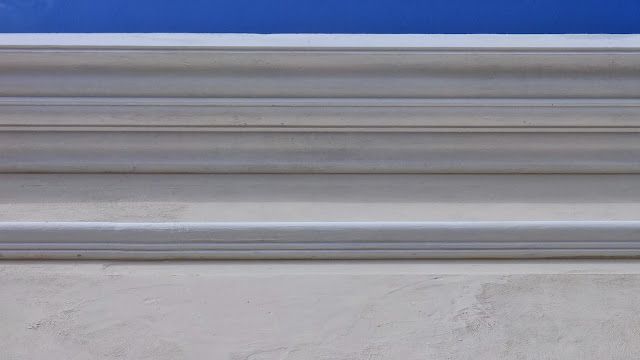 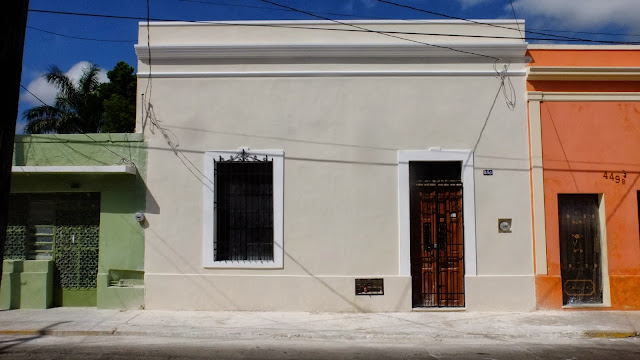 Read an earlier post on the facade project here.

Wild Neighbors: Parrots in the Patio 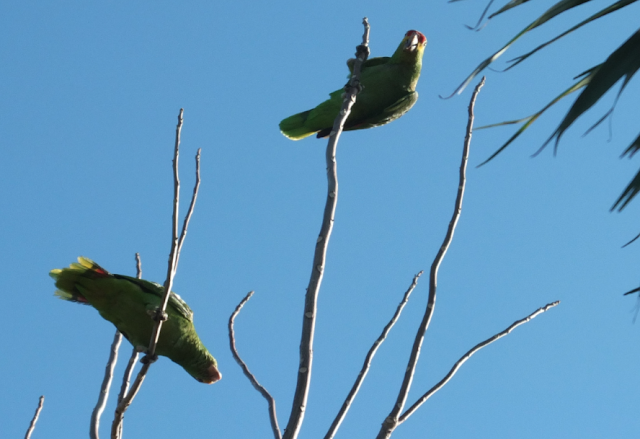 I've written about these guys before.

One of the beauties of the inner-city block on which I live is the large contiguous tree-filled green space which is not visible from the street. Most of the neighbors' back yards are full of plants and trees, providing ample habitat for a large variety of wildlife, particularly birds.

I love watching all of the birds here, but I think my favorites are the parrots. 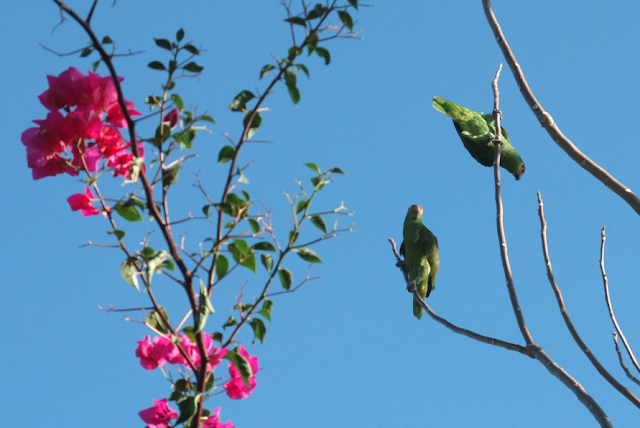 These Red Lored Parrots come and go as the various fruits and nuts ripen. They've been hanging around lately chewing on the seeds of my neighbor's cedro tree. They'll drift away and then return as other seasonal food becomes available in the area.

These photos were actually taken last spring near the end of the dry season, when some trees are bare of leaves. Right now, it's pretty hard to get clear shots of the birds because they blend right into the dense foliage. Most often I know they are here when I hear their high-decibel chatter. 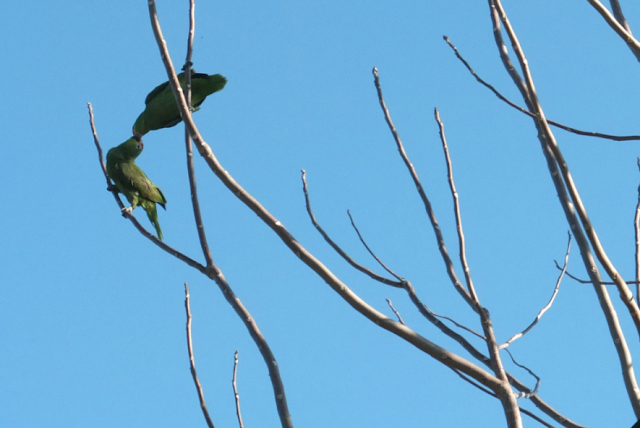 I've seen as many as forty of these parrots flying together. This flocking usually happens in the evening, when they head to their sleeping and nesting areas in a park a few blocks north of here.

Often when they are nearby, their mutters and shrieks are my morning alarm clock. Some times I will grab my first cup of coffee and sit in the patio to watch their interactions.

In any case, the parrots are entertaining and always interesting to observe. And I don't have to leave the back yard to enjoy their company. 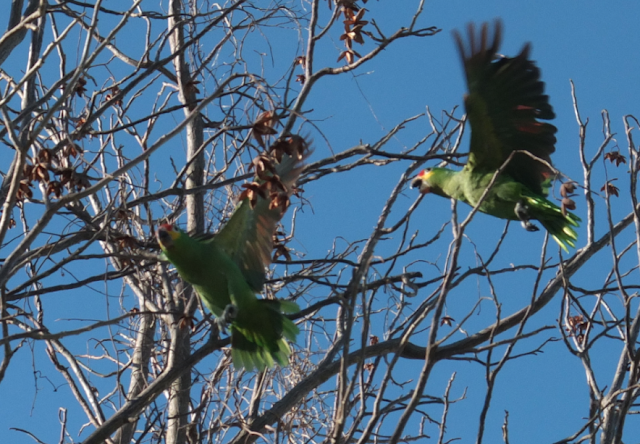