Story: The Roll of Wire 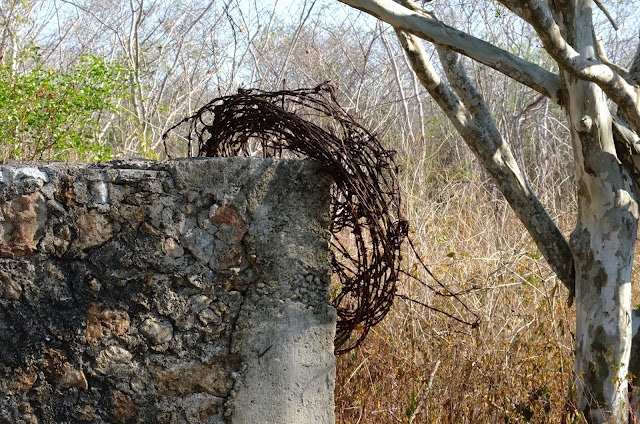 A roll of barbed wire has been hanging for many years, perched on the corner of the corral out at the ranch.

Many times I've noted that I ought to do something with it. Although it's not in the way, the wire slowly rusts there where it is, exposed to the weather. I could store it under cover somewhere. It might be useful one day.

But I have left it where is hangs, mostly out of inertia, and partially because I like its air of pending usefulness.

I was looking at it one morning recently as I finished up some work nearby, and it prompted memories of a story I heard years ago.

In the early 90's I was working on a video project for the Simon Paneak Museum in the remote Nunamiut (inland Eskimo) village of Anaktuvuk Pass, Alaska, and the crew and I were staying at the home of the museum director, Grant Spearman. Incidentally, Grant's house was the last inhabited traditional sod house in Alaska and a living museum itself. Staying there was an interesting experience, but that's another story.

In his capacity as museum director, Grant coordinated closely with village elders, and had worked a lot with one, "Arctic John" Etalook, who had spent his youth living in the old way, as a nomadic caribou hunter. In his later years after his people settled in Anaktuvuk Pass in the late 40's, Arctic John ran a trap line in the Brooks Range and had remote hunting and trapping camps in the Bush.

Grant related how one day in the early 80's he'd told Arctic John, then quite elderly (he died in 1984), that he was going into the country and would be passing near one of John's old campsites. Arctic John asked Grant to pick up some of his traps that he'd left there on his last visit. Grant collected John's traps, which he'd found hanging right on the small tree where John had left them. The interesting part of this story is that it turned out that John's last visit to that spot was decades before. And the traps Grant had collected remained shiny and uncorroded, as if they'd been hanging there a week or two.

It's fascinating to know that there are still places where one can set something down and it will remain undisturbed and untouched as many years roll by. Or longer. I recall once climbing a hill in a remote area of the Brooks Range to stumble upon a tent ring, a circle of stones used to hold down the edges of a caribou-skin shelter, that may have been abandoned hundreds of years before.

But the message I take here is that life is a lot like the roll of wire and Arctic John's traps. We have resources, tools that are available, that often we just leave on the shelf and neglect to put to use. I wrote here early in the year that I was about to start renovating the little house at the ranch, but I have yet to start. My plans changed course and I am glad I took more time to think them over. Now it's time to get moving. I believe I am about to take down that roll of wire and put it to use.