When I was 13 years old we, an Alaska family, moved to South Florida. For about the first year or so I really thought I might die. It seemed so incredibly hot.

The whole family felt much the same. We kept the house central air conditioning temperature set very low and spent a lot of time inside except perhaps in the evening or to go to a nearby pool. When we had to go out we ran to the Oldsmobile, which normally had its AC cranked up so high that the noise of the fan made it difficult to talk. Sometimes the kids battled over who got to sit in front between Mom and Dad, where the center vent blew freezing air into the lucky kid's face hard enough to make one's hair fly. We loved that.

Thanks to my parents' ability to afford our electric bills, we survived in Florida for four years. Then we moved back to Alaska, and I did not expect to live in another hot place, ever again.

Now as a ten-year full time resident of Mérida, it's interesting to see how I have adapted. Until just a few months ago I have lived here, a place hotter than South Florida, without air-conditioning at all. Now that I have AC in the bedroom, I still use it only occasionally.

My sister came around, too. After a few decades of feeling always cold in Alaska, she and my brother-in-law moved back to Florida several years ago.

Now, strangely, I find myself looking forward to my visits to see them in Florida as a respite from the heat. Particularly this time of year, when the Yucatán temperatures hit their peak.

The weather in Mérida has been reaching about 39 - 40 Celsius (102 - 104F) lately, and the forecasters say it will get quite a bit hotter later in the week, possibly as high as 45C, which is around 113 on the Fahrenheit scale. Today's edition of Mérida's Diario de Yucatán featured the banner, "Yucatán arderá," "Yucatán will burn." This morning's headline story tells us that record temperatures will be set in coming days.

I find it interesting that I often look forward to a Florida visit as a cool break from the Yucatán's blast-furnace heat. It points out how flexible we can be, and how much I've changed.

Wanderings: Walk Around a Ranch 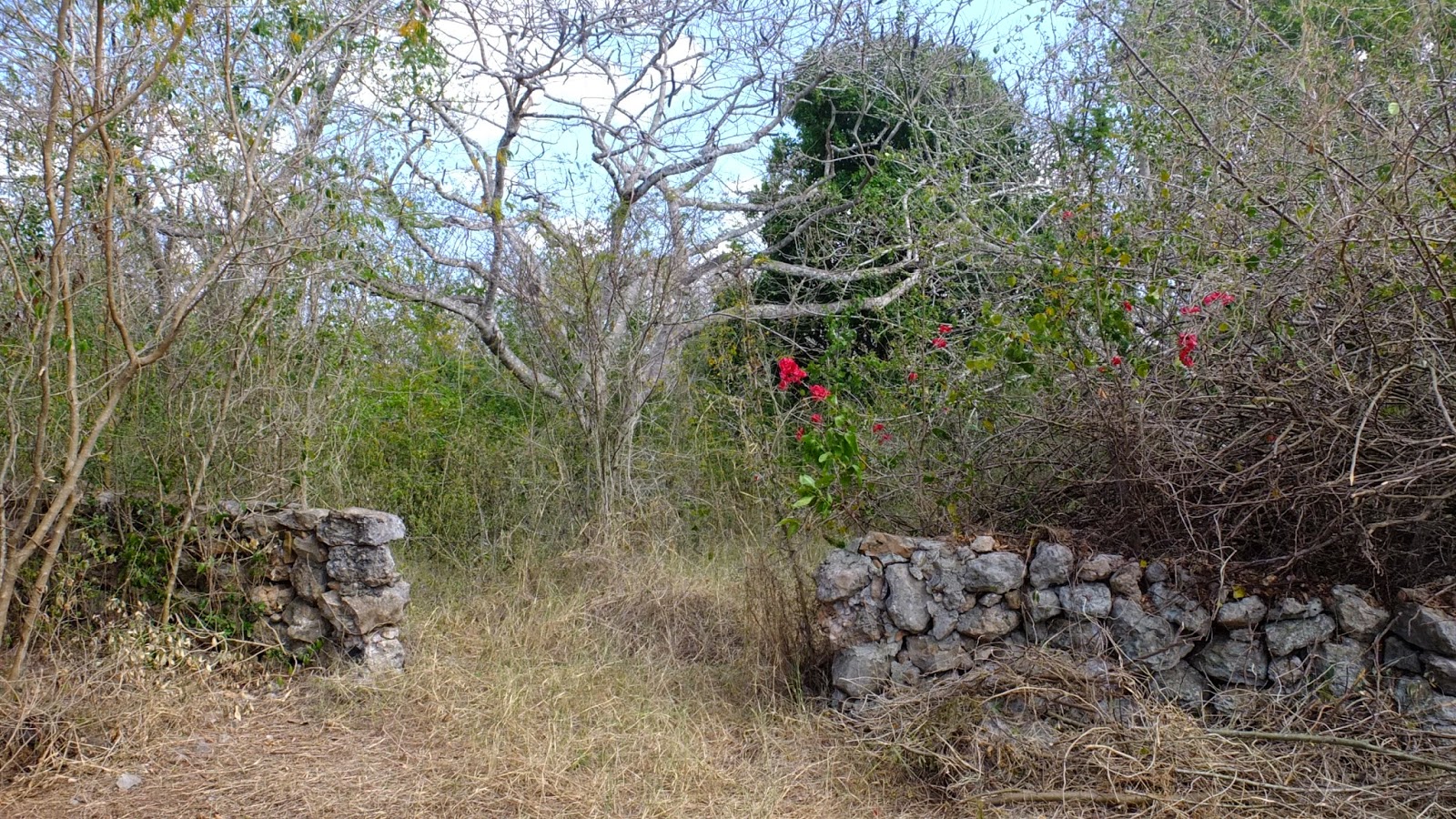 Last weekend I took a walk around a ranch named San Benito, about an hour's drive east of Mérida.

This "ranch" is a parcel of old cattle pasture which hasn't been grazed in years. It definitely is not wilderness, but amidst swathes of maleza -- dense, thorny scrub where fields and pastures used to be -- there are some nice patches of old native trees, wildflowers and interesting plants such as orchids.

I drove out Saturday with my friend Victor and his niece Paola. We left the city early, to avoid traffic and heat, and upon arriving met a guy named Ramiro, who is being paid to clear out some of the undergrowth. Since in advance I'd asked permission of the caretaker, Ramiro knew we were coming, so he welcomed us and took a brief break from his work to chat. When we headed down one of the trails to explore, he resumed work with his hatchet and moruna.

This was not my first visit here. I had walked this parcel a few times in the past, starting in 2009 when first it was advertised for sale. The property suddenly sold before I realized just how interested in it I'd become, and I felt disappointed. Perhaps because I loved and lost, I've had a sort of long-distance romance with this piece of land ever since. Recently when I discovered that the new owners want to sell, I came back here to see if the feeling was still the same.

One of the things I like about the ranch is that because it has lain largely undisturbed for about a dozen years there are animals here. I have seen wild turkeys and a good variety of other birds. Bird chatter was a constant background music as we walked the overgrown trails. There are signs of deer, too, and I found the remains of an armadillo and a large snake skin as we hiked. Along with many native tree species, I spotted bougainvilleas in flower and a "flamboyan" (Royal Poinciana, or Flame Tree) that will be spectacular in season.

Although quiet now, this land was worked for generations. The entire place is enclosed and cross-fenced with dry-stone walls, "albarradas," and there is an old one-room stone house, corral and a deep well with an antique windmill-driven pump to keep the watering troughs and the cistern full.

As we arrived, I'd noticed that the fruit on a great old ciruela (wild plum) tree near the well and house is nearly ripe. After our dusty, hot walk I was tired and parched. I picked and ate a low-hanging plum. Although still somewhat hard and bitter it tasted good. Maybe I'll come back in a few weeks to pick some when they are ripe.

That would be a good opportunity, sitting in the shade by the well and eating those soft, tart wild plums, to consider again all that I might do on a piece of land like this one.

Email ThisBlogThis!Share to TwitterShare to FacebookShare to Pinterest
Labels: Wanderings

This post was originally published five years ago today under the title, "Goodbye Neighbor, and Thanks." Recently as I pondered the future of this blog (which has been inactive for several months), I have been reviewing old posts. This is one of my very favorites, and an inspiration to get the blog rolling again. Stay tuned. 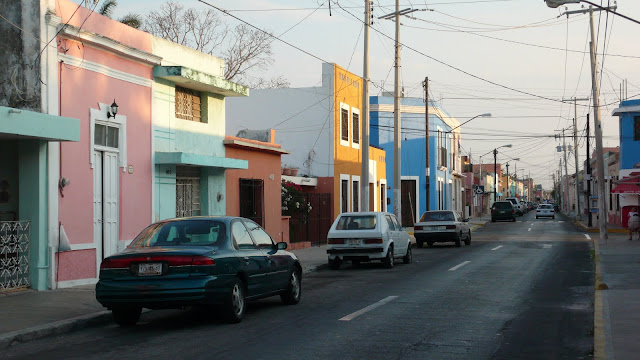 My neighbor Alejandro died last week. I was out of town when it happened, and busy away from the house when I got back, so I didn't get the news until several days later.

Alejandro and I were not close, but he was my first friend in the neighborhood after I moved into my house in Mèrida a few years ago. He was an outgoing, gregarious type, always waving and saying hello, and I guess it was just in his nature to be the first one to start a conversation with the new guy on the block.

Alejandro was not a young man, but with his unlined face and continual smile he was energetic and always busy, so I was more than a little surprised when he told me several years ago that he was 75 years old. I would have sworn he was no more than sixty, and he might have passed for younger. He'd lost his wife at a young age and remarried, and worked many years as a taxi driver. He remained happy in his second marriage and together with his wife Ingrid raised a houseful of children, who now have families of their own.

Alejandro was always busy with projects, such as painting and repairing old cars he would buy, fix up, drive for awhile, and then resell. He told me he liked to work, and the problem-solving and tinkering involved with the cars, along with the incentive of making a little extra cash when he sold them, kept his mind and body agile and gave him something interesting to do.

Not that his days were empty. Various children and grandchildren were usually around, and the modest house full of activity. One of the last times I saw him, a few weeks ago, Alejandro was delightedly painting the house next door, which they had rented so his daughter and her family could move in. People from the U.S. often don't understand why different generations of a family would want to live in such close proximity. Here, people can't fathom how people from el norte manage living so far apart from the company, affection and support of their closest loved ones.

Passing by on the street when Alejandro was outside working often entailed more than a casual "buenos dias." He loved to talk about what he was doing, and to find out what I was up to. I sometimes brought him my car and home maintenance problems for advice. The give and take usually ran on for awhile. It seemed as if the socializing for him was the main point of being out on the street, and that washing the car or fixing the tire was something he would get done but not particularly important in comparison.

Alejandro's family owns a ranch about an hour's drive outside of Mèrida, and many times he invited me to go with him for a couple of days and hang out. Unfortunately that's something we never did because I always had something else going on. I started thinking about that when another neighbor told me Alejandro had suddenly died of a heart attack earlier last week. One of the reasons I moved to Mexico was because I wanted to stop living in tomorrow (laboring on and on for that retirement, saving all year for that brief vacation, etc.) and start doing what I want to do now. I have gotten better at living in the now, but the fact that I had put off the ranch visit time and again until it was too late bothers me. I looked forward to that trip as much as I liked Alejandro; he was a nice guy and we probably could have been better friends. I take all this as another of those little messages that life sends us, if we only will pay attention to them, telling us maybe we need to make an in-course correction along the way. I am taking it seriously.

Once my train of thought got rolling along these lines, I started thinking about how happy and successful this neighbor had always seemed to me. He was not a wealthy man, in fact by many Americans' standards he would have been considered poor. Alejandro and his wife raised a large family in a small three-room (not three bedroom, three room) house, where they lived for at least forty years. He didn't have a lot of stuff. His thirty-year-old cars were worth at most a few hundred dollars, and sometimes were broken down. But he always, even when under a balky car and covered with sweat and grease, seemed to enjoy living in the present and have a good time.

I read not long ago that Mexicans have among the highest levels of personal happiness in the world. I think that Alejandro is a good example of some of the reasons for this. It looks to me as if my late neighbor's success in life boiled down to a few simple points. He liked to be happy, so he usually was. He had a good attitude and didn't let small irritations or things beyond his control ruin his day. He was completely authentic: he had no "image" to maintain. He enjoyed everything he did as best he could. He seemed to be more interested in relationships -- his family, friends, and neighbors -- than in things or schedules. I think these qualities gave meaning to the life of a humble and modest man, and filled it with affection and love.

There is an example and a message here.