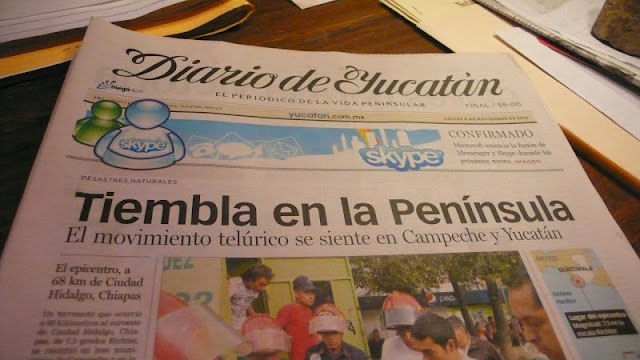 There was a strong earthquake centered off the coast of Guatemala on November 7, and it was felt all over southern Mexico.

Sismos, quakes, normally don't merit front-page headlines in Yucatán, which is not known for seismic activity, but this one was felt in Mérida. I didn't notice it, but the newspaper reported the next day that the quake had been felt in the upper levels of some multi-story buildings in the north part of the city.

Various friends of mine in Mexico and Oaxaca states, closer to the epicenter, commented about the quake on Facebook. I called one friend in Oaxaca who reported that while startling, the quake seemed to have caused no damage in her area.

Since that time several more strong quakes have been felt in Mexico. All of this recent activity brought back to me a cascade of earthquake memories. All through my years in Alaska, quakes and smaller earth tremors were a normal occurrence. I also felt quakes as a teen in Colombia and later on visits to California. But fortunately the only loss we ever experienced from quakes was a few dishes and decorative bottles of Mom's that fell in the kitchen during a Fairbanks quake in 1967.

When the 1985 quake hit Mexico City I was in Israel, picking bananas on a farm in the Western Galilee. Several of my co-workers were Mexicans. What I recall vividly is how frantically they followed the news, and how one of them tried, for days before achieving success, to get word of her family. Now, interestingly, I know several chilango families who moved from Mexico City to Mérida in the aftermath of that event.

In August 2002, as I was searching for a home in Mexico, I visited the city of Colima, just a bit inland from Manzanillo on the Pacific Coast. I was enchanted by the area and its mountains, Colima's proximity to the coast, and interesting old houses in the city center. I looked at several that were for sale. Then a few months later back home in Alaska, I tuned in radio news one morning to learn that a massive quake had shaken the area. When I had time to watch video and see photos of the damage, I saw that some of the very streets and buildings that I'd looked at were now rubble. As a result, Colima moved quite a few notches down my list of possible Mexican hometowns.

I really like old Mexican architecture, but one of its problems is that although the stone, brick or adobe buildings with their thick walls are stout, they can be extremely fragile in quakes because they are heavy and built without reinforcing steel of any kind. Yucatán is not known for earthquakes, and Mérida has more intact colonial buildings than any city in the country outside of Mexico City itself. That so many of these very old, un-reinforced buildings are still standing was to me a good sign that Yucatán is a fairly earthquake-safe zone. A year after visiting Colima and eight months after the Colima earthquake of 2003, I bought my house in Mérida.

However, earthquakes do originate on the Yucatán Peninsula, according to an interesting news item published in El Diario de Yucatán a few days after the recent tremors in Mérida. The article relates that the most notable in recent times was a quake of magnitude 4.2 on the Richter scale, centered in Quintana Roo in 2010. This shaker was strongly felt in Ticul, little more than an hour's drive from Mérida.

The article quotes an investigator in the Dept. of Seismology at the Universidad National Autonoma de Mexico (UNAM) in Mérida as saying that little is known about what seismic faults exist in the Peninsula, and for this reason temblors in the Yucatán are little understood. He urges additional research into the matter, stating, "We need to further investigate the active faults, to see if they are large or small, and to find out if a disastrous earthquake could occur in the Peninsula."

Mérida and the Yucatán's population is growing rapidly. We have lots of old buildings here, and new construction often is not built with earthquakes in mind. This suggestion sounds like a good idea.

Posted by Marc Olson at 5:20 PM 8 comments: Links to this post

Contentment: Inspired by the Birds 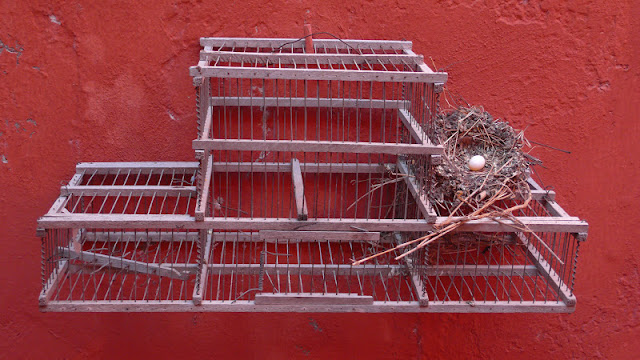 It's not unusual that every so often we crave change, a new pace and new stimulation. I saw a study once that identified actual psychological reasons for the famous "seven year itch." I do not remember the specifics, but I know from experience that over time routines can stultify; stuck in a rut we live on automatic. But change stimulates. It keeps us moving and thinking, makes us more creative, and allows us to grow by looking at things in new ways.

In my life the "itch" has been a reality and the source of many of the good things I have experienced. Looking back at the big changes I made over the years, I can see a pattern of major transitions occurring roughly every five to ten years. The average of the intervals between major shifts is startlingly close to the storied seven years.

And here again I find myself, seven years after I moved to Mérida to live full time. It's been seven years and four months to be exact. For a while now I have been having recurring thoughts about making a change.

I am restless, but at the same time I really enjoy the life I've got: a pleasant, well-situated, comfortable house in a great town, close friends, low stress and freedom to do many of the things I want to do. As we age there is a lot to be said for this kind of stability. Although I feel the need to scratch the itch that calls for change, I really don't want to chuck everything and start with a blank slate, as I did on several occasions when I was younger.

So I was contemplating this problem yesterday as I cleaned out a storage area which, because it is partially open, attracts nesting doves, known here as tortolitas. Among the objects stored high on a shelf there is an old bird cage that has proven to be the platform of choice for their nests. After several years of hosting generations of these bird families, I'd decided to do something to encourage them to move elsewhere. I took the cage off the top shelf with the goal of removing the currently-vacant nest, and cleaning up the litter of twigs and grass, broken egg shells and the encrusted droppings that had built up there.

It was then I noticed off to one side the egg, apparently infertile or dead, which was left by the last pair to occupy the nest. I had noticed that instead of the normal two they raised only a single chick, which fledged last week. Apparently this egg was pushed aside when it didn't hatch. I placed the egg back in the nest and hung the cage on a hook outside while I cleaned up the area.

Instantly I noticed the possibilities of a good image, and as I arranged the scene and took photos, realized what an apt solution for my "itch" conundrum the picture suggests. It is natural for birds to escape from and to stay away from cages whenever possible. The tortolitas who built this nest purely by chance created a startling image, and gave me an idea: Instead of abandoning our "cages," we can look at them in new ways and use them for new purposes.

Although I will not leave Mérida, I have been thinking about selling my house and making some serious changes, much as I did in the past. Perhaps that's not the right tactic at this point in the game.

The challenge is to, as the timeworn saying goes, "think outside the box," or as the photo suggests, outside the cage; not to abandon it or toss "the old" out, but to find ways to utilize what we've already got to hatch new, creative perspectives. This is a concept worth consideration. 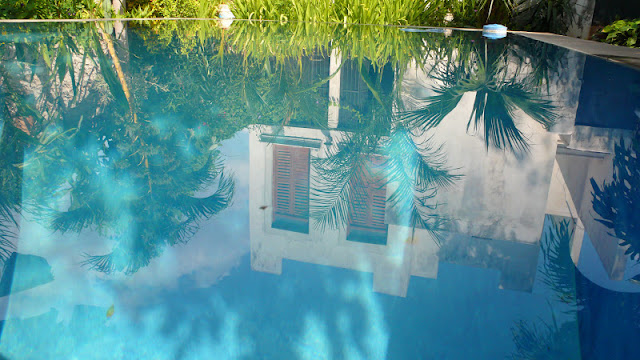 Swimming at my house is not the same as it was a month or more ago. The water in the pool is cooling rapidly.

I notice this situation each fall. Around the equinox in late September, abruptly the sun is far enough south that the tall trees in my neighbors' yards shade the pool for a good part of the day. Without benefit of the warming afternoon sun, within a couple of weeks the water temperature has plummeted.

During this season I still get in the pool, but instead of an extended, soothing, leisurely soak, now the experience is brisk. If I need a little help waking up in the morning, I know exactly what to do. A brief plunge accomplishes the task. I often take these morning wake-up dips with a steaming cup of coffee on hand. Poolside cold drinks are out of the question for the next few months.

Gone for a while are the relaxing afternoon or evening "floats," when I hover between the earth and sky on a cushion of warm water and observe nature, or snooze. I'll miss those tranquil, meditative moments and the calm but energized way I feel when I leave the water afterward.

Swims for the time being are quicker, more active affairs. My pool is not long enough to allow me to get up any momentum swimming laps, but I kick energetically, dive like a seal, and tread water for exercise. It is reported that there can be health benefits to plunging or swimming in cold water. All I know is that when the pool is cool I feel invigorated when I get out.

Either way, whether the water is warm or cool, a little pool time makes me feel good.

A side benefit of the cool months in Yucatán is that pool maintenance is easier. That's because algae that sometimes grow on pool sides and bottom reproduce much more slowly in cool water. Microorganisms and bacteria that cloud water are in the same boat. I use less chemicals and work less often at keeping the pool clean during the cool season.

I continue to swim in all but the chilliest weather. Normally there are times from December into February when I don't swim much at all. It just seems too cold. It's funny to remember how I participated in the Polar Bear Swim in the Chukchi Sea at Barrow, Alaska some years ago. That day we splashed and swam amidst large chunks of ice. On the coldest Yucatecan winter days, my Mérida pool water would seem absolutely tropical by comparison.


Read another post on enjoying the water here.
Posted by Marc Olson at 5:59 AM 16 comments: Links to this post