This is a favorite piece from 2009. Three years ago An Alaskan in Yucatán was new and had few readers. I recently realized that this post has had very few hits, so I've decided to share it again. 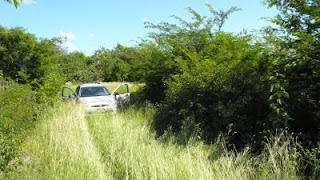 Sometimes I go on the road with a purpose. On other occasions I go just to see where the highway leads me. I rarely fail, in wandering around Yucatán, to return home with an interesting experience or having seen something thought provoking, mysterious, or beautiful. Recently I went, purportedly out of curiosity, but in reality just on an impulse to go, to spend a couple of hours tramping around a parcel of land that's for sale a bit more than an hour's drive from the house in Mérida. On the return trip, I took an old two-lane highway that meanders quietly, and with more bicycle and pedestrian than motor traffic, through hennequen plantations, ranches, and groves containing native trees like cedro, ramón, ceiba and chacá. Along the way it threads through several small pueblos and old haciendas. The road then abruptly melds into a more modern, divided four-lane highway, quicker and more efficient but far less satisfying, that leads back to the city. 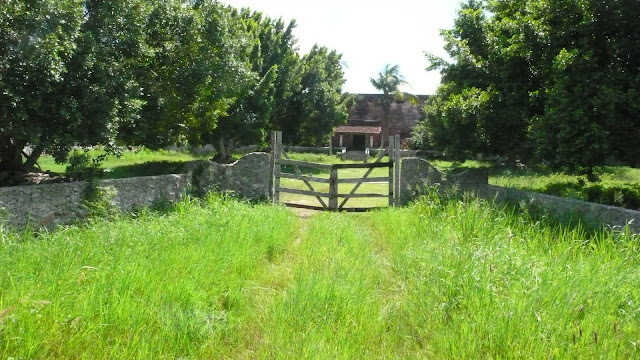 I had passed through here before, but until this day had not noticed a gate and big old house, mostly hidden by very large trees, set back a bit from the road. The casona is situated on a straight stretch at the approach to a community; on past trips I must have been slowing down and watching more for animals, bicycles and topes, or speed bumps, than looking at the scenery. 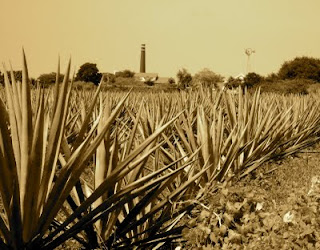 I squinted. This was a hacienda. Large tracts, thousands of mecates of spiky blue-green hennequen plants grew here. When they were harvested, the pencas, or leaves, were bundled and heaped on horse-drawn trucks which ran on a narrow-gauge railroad from the far reaches of the property to the factory buildings. There the leaves were processed into sisal fiber, the basis of all variety of ropes and lines for the world's navies and merchant fleets, and baling twine for American Harvester machines. There probably was a huge chimney here, taller than the nearby church belltower back when enormous, belching smokestacks meant progress, prosperity and wealth for Yucatán's landowning elite.

It was a Golden Age. Mérida became fabulously rich on this trade. Due to the vast quantity of ships coming into nearby Sisal and Progreso harbors, it was easier to travel to ports in the U.S. or across the Atlantic than to go overland to Mexico City, and Yucatecans looked abroad. European-style mansions mushroomed on Mérida's boulevards. Women wore the latest in French styles and directed vast housholds of servants while ensconced in salas furnished with the finest, imported furniture and carpets; men smoked Cuban cigars and drank the finest whiskies, wines and liqueurs from across the ocean. Not only did hacendados send their privilieged offspsring to the Old World for schooling; the wealthiest are rumored as well to have sent their clothes for laundering there to avoid having the fine fabrics damaged by Yucatán's hard water. Haciendas like this one made it all possible...for awhile.

As the sun prompted trickles of perspiration to tickle my neck, I came out of my waking dream. The house is not terribly well-kept, but neither has it been abandoned to nature and fallen into ruin, as rapidly happens in this climate. Someone, probably a caretaker or watchman -- an older señor living in more modest quarters nearby -- keeps the weeds trimmed back near the house, most likely by putting a few animals out to graze on the place, and maintains gates, doors and windows in repair and locked. Nevertheless several other visible structures, farther back in the trees, are nothing but shells, their roofs long gone, columns vine-encased green cylinders, arches intact but no longer supporting the load they were designed for, and with mature trees dropping an ever-thickening compost of leaves onto floors where once people lived and worked and mopped away the dust. 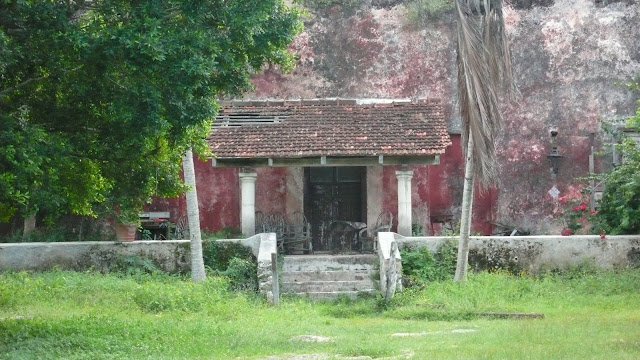 There are rocking chairs on the front terrace of the old main house, but they are weathered silver, warped and beyond reclaiming, woven bottoms long rotted and the shreds carried away by the wind or nesting birds. The walls, once painted a rich "hacienda red," are streaked by many years' accumulation of black mold and at the same time bleached pink by neglect. A section of the delicate French tiles on the porch roof, molded and fired in Marseilles and imported to Yucatán more than a century ago as ballast on a returning hennequen ship, have fallen and shattered. It is easy to imagine that decades ago, one morning after breakfast, the doors had been locked when the owners left on a trip, and because of some incident lost to history they never again returned to live here. Thereafter, for a long time the house was perfectly maintained like a time capsule, ready for the owner's imminent return, only to very, very slowly edge into decrepitude as hope eventually faded and the household staff aged or dwindled.


I have dreamed from time to time of finding an old place such as this, fixing it up just enough, bringing in furniture and my books, hanging pictures and putting in a garden. Perhaps I would get a dog and keep a few other animals. I would eat my own wonderful fresh fruit, gather eggs hidden by the hens in far reaches of the garden, escape the heat by swimming daily in the ancient cistern's invigoratingly cold well water, and live a long, healthy life of genteel rusticity. Then I begin to wonder if I, too, perhaps out loneliness, isolation, illness, wanderlust -- for economic or some other reasons -- might one morning finish my coffee, casually lock up and drop the keys in my pocket, walk away, and never manage to make it back home again.
Posted by Marc Olson at 11:58 AM

I appreciate comments, but will delete comments that are rude, offensive or off topic. Unfortunately, due to the heavy volume of spam, comment moderation has been enabled. I will try to approve comments promptly, but your patience is appreciated.
If you have technical trouble leaving your comment, please email it to:
marc_olson@hotmail.com
and I will post it for you.